White-bellied Blue Robin is a primarily blue colored bird found in a few places in the Sahyadri (Western Ghats). Here is a photo of the bird I have seen from Pampadum Shola National Park. So far, I have seen this only once. 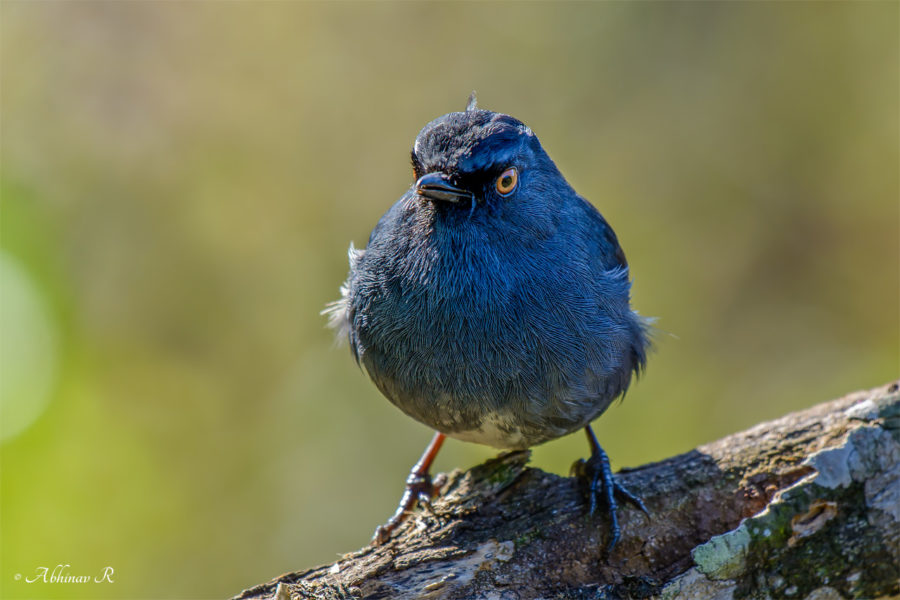 It was found during a short morning bird watching walk. I heard it singing from between the bushes. And just came out and sat on this branch for a few moments. That was when this photo was made. The lighting was from a side. So the left side of the bird was in shadow. It required a bit of pulling the shadows during post-processing. The distance to the bird was merely 3 to 4 meters.

White-bellied Blue Robin is a highly endemic bird. Its distribution is confined to the shola forests of Western Ghats, in the high altitude regions like Munnar. Pampadumshola forests is one among the very few habitats where it can be found. Its status is considered as ‘Endangered’ according to the IUCN.

This bird can be confused with Nilgiri Blue Robin/White-bellied Shortwing (Myiomela major). There are some discrepancies regarding the names and classification of these two birds. Earlier both were considered as one species, Myiomela major. But now, M.albiventris is given a species status. But still in some places, it can be found that the old naming is followed. Another thing is, some consider it to be under the genus Brachypteryx, and some under Myiomela. Anyway I am following the latter, as it seems to be more recent.

Apart from the name, another difference is that M.major is said to be found towards the northern side of Nilgiris; and M.albiventris towards the southern hilly regions.

In appearance, the bird looks almost like a round shape. And short too. The belly region has white patches, as the name suggests. The main color is blue. The iris is orange in color, and there is a black coloring between eyes and bills, and throat region.

After all, it is a beautiful bird, but the concern is that its population is very low. That raises the importance of preserving the remaining shola forests, which is home to a wide variety of endemic species.