Malayan or Megisba malaya is small white colored butterfly from the Blues family – Lycaenidae. As I have read, according to some recent information, Tailless Malayan – Megisba malaya thwaitesi – is a subspecies of the former. It mainly occurs in the southern parts of India. The tailed variety is seen in some of the northern states. Here are the photos and details about the butterfly. 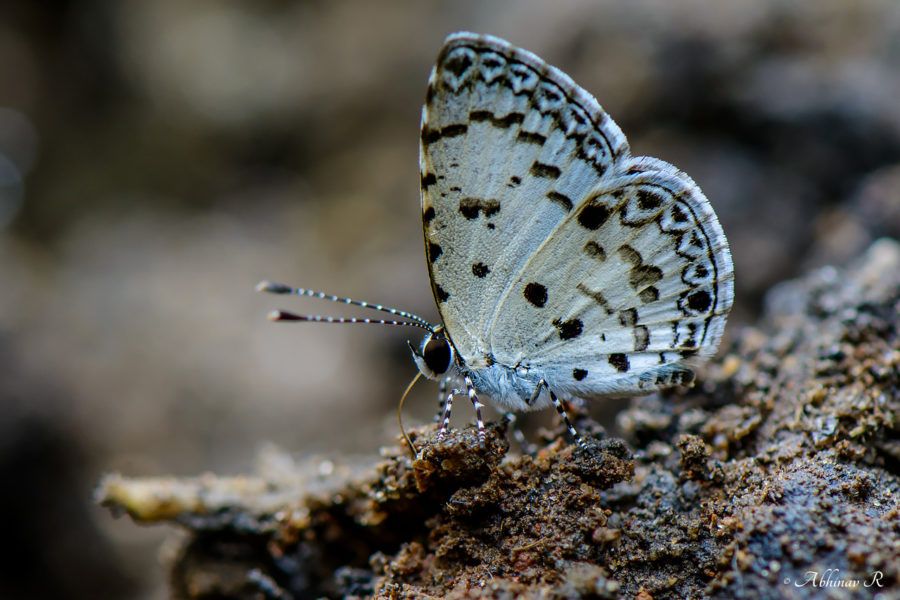 This photo was taken near Chimmini Wildlife Sanctuary in Thrissur district of Kerala. Found a large group of different butterflies mud puddling here. Malayan was one among them. There were at least seven different species there at that time. I had to watch carefully to distinguish them from other lycaenids including pierrots.

As I stated earlier, the tailless variety of Malayan is the one occurring in Kerala. Not sure whether the tailed variety is seen here or not. Probably no. Besides the tail, both subspecies looks similar.

Malayan has a series of four clearly marked black spots on the costa of under fore wing. Common Hedge Blue lacks this. Also, the placing of spots on the under hind wing is also slightly different. Currently I don’t have a photo of the A.puspa, will add a comparison photo later.

Coming back to Malayan itself, the primary color of the under side is white. From the photo, there are four big easily noticeable black spots on the discal area of under hind wing. Three of them are in line. Another prominent black spot towards the costa on post-discal area. There are some paler black markings on the middle of the wing. The marginal area also has black spots running throughout, surrounded by spiky inner border.

Under fore wing has elongated markings/spots on the post-discal region. Most importantly, the costa has four black spots.

This is small butterfly with wingspan about 20 mm.