Rock Agama is a beautiful reptile from the Agamidae family of lizards. The first time I got a good picture of it was from Chinnar Wildlife Sanctuary. These are common in the sanctuary, which has a lot of rocky habitats. See more about it below. 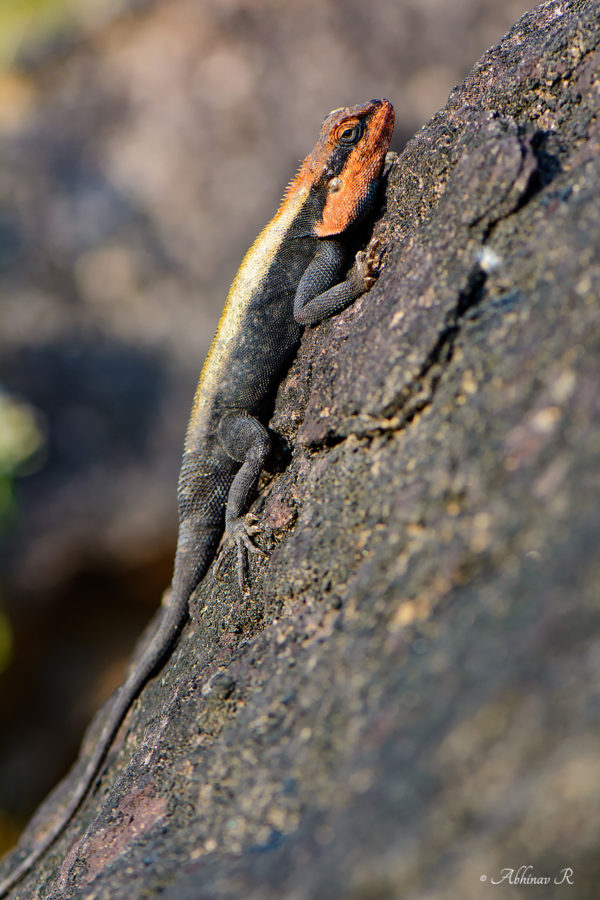 Found this one along with one or two other lizards during the morning trek. Our guide was very helpful. I hadn’t seen these lizards until he pointed at them and said that these are Rock Agamas. Without disturbing them, I approached them a little and clicked this picture. Another close-up version of this same lizard is added to the albums also.

As shown in this picture, the head area is bright red in color. The cheeks are swollen, and there is a black band on the side of the face. The top of the body is yellow in color. The sides of the body, legs and tail are black. Female is not as colorful as the male. They are also known for camouflaging with the surroundings by changing colors. These are usually found resting on rocks and hence the name. The have a behavior of lying down flat on the rock in case of a threat. They also sometimes watch the surroundings by lifting the head and front body using the front legs.

First I thought that these are Peninsular Rock Agamas (Psammophilus dorsalis). Later I learned that Blanfard’s Rock Agama (Psammophilus blanfordanus), another one from the same family found in India, also looks very much closer to this. As of now, I’m not sure to which one these the above belongs to. Will update this later when I get a correct information. Or if you know, you can state it in the comments. Useful identification tips are welcomed.

Now, hope you liked this picture and the natural beauty of the creature.