Angled Pierrot Butterfly is a species of lycaenid butterfly found in India. It is also one among the ‘pierrots’ found here in Kerala. Common Pierrot is the most common among them. Others are Dark Pierrot, Striped Pierrot, Banded Blue Pierrot and Red Pierrot, to name a few. See more about the Angled Pierrot below. 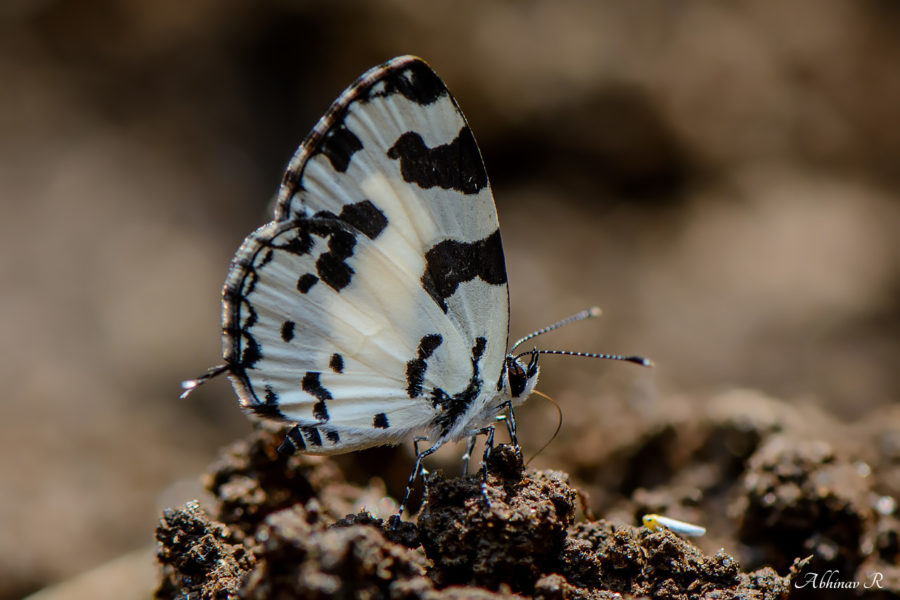 This photo above was taken on a noon time around 1 pm. As seen in the photo, it was mud puddling along with other butterflies belonging to different species. But there were only two or three from this species. I was able to get a few good pictures of it.

In this photo one can see the group mud puddling of different butterflies. The one in focus in the center is what we are talking about currently. The one towards the front right with a golden color is Dingy Line Blue (not clear here, but as I remember), and the one in the back side is Forget-me-not (Catochrysops strabo).

Here is a brief description of the major markings as evident from the photos. The under fore wing has a lean black marking near the base, which does not touches the costa, but is joined by a black line from the base of under hind wing. Discal area has two broad and curved, both from the costa. Apex, tornus and middle of the marginal area have comparatively smaller and irregular shaped markings.

Under hind wing has  markings near the base which together looks like a ‘u’ shape. Post-discal region have two irregular shaped markings, one from dorsum and the other from costa, and there and a small black marking in between towards the margin. Hind wings have black tails which are white tipped.

This small butterfly is considered not rare in India. Wing span is about 26 mm or just above. Visits flowers and muddy areas.