Ramakkalmedu is a small hill station in Idukki district, Kerala lying close to Tamil Nadu – Kerala border. The place is blessed with the wind blowing almost all the time. From the top of the hills, one can view the towns and vast stretches of the villages of Tamil Nadu. It is a nice place to relax by enjoying the breeze and the beautiful views. I had been there a couple of times. And in fact, I like this place more than even some of the other busy hill stations.

There is a belief that Lord Rama had once set his foot on this place, according to Hindu epics. So that is how this place got the name ‘Ramakkalmedu‘. It is a small village still not crowded with people.

A walk to the hill

On reaching the place there is a walkway to the left leading to the top of one of the hills. The half a kilometer walk/trek first passes through shola and bamboo forests. These forests are habitat for various birds and small creatures. I had spotted some birds including Indian Paradise Flycatcher from here. And then come grasslands as we approach the top. The walk is not so tedious. Almost anyone can go. At the top, there is a big rock and a few others around.

During summer, the place will be dry. Also, haze can lessen the stretch of view. If the atmosphere is clear, we get a breathtaking view of the villages downhill in the east and the wave-like mountains of Sahyadri in the west. The windmills of Ramakkalmedu can also be seen from here at a distance. After spending some time there, it is better to return before it gets dark since we have to pass through the woods. The place is open to visitors throughout the day. 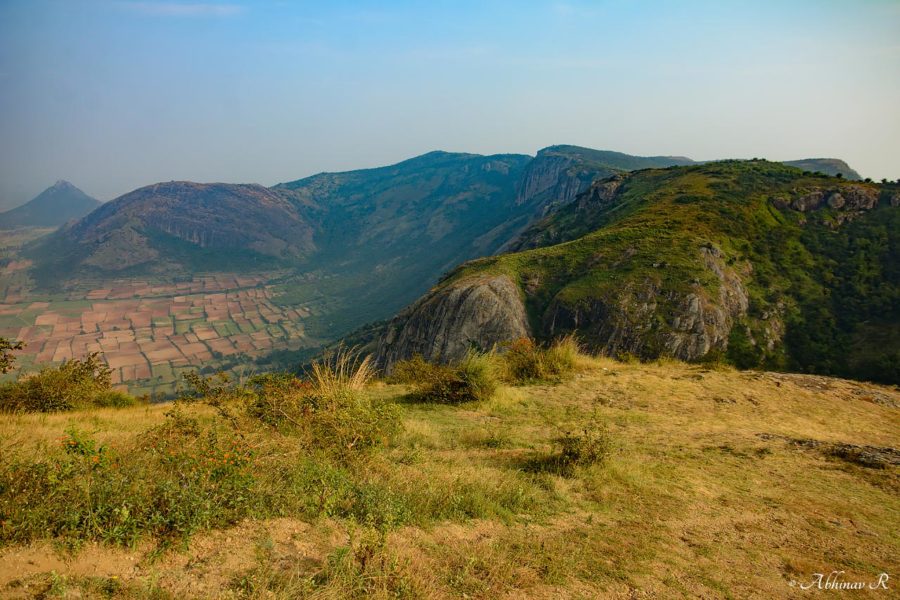 A view from the hill. 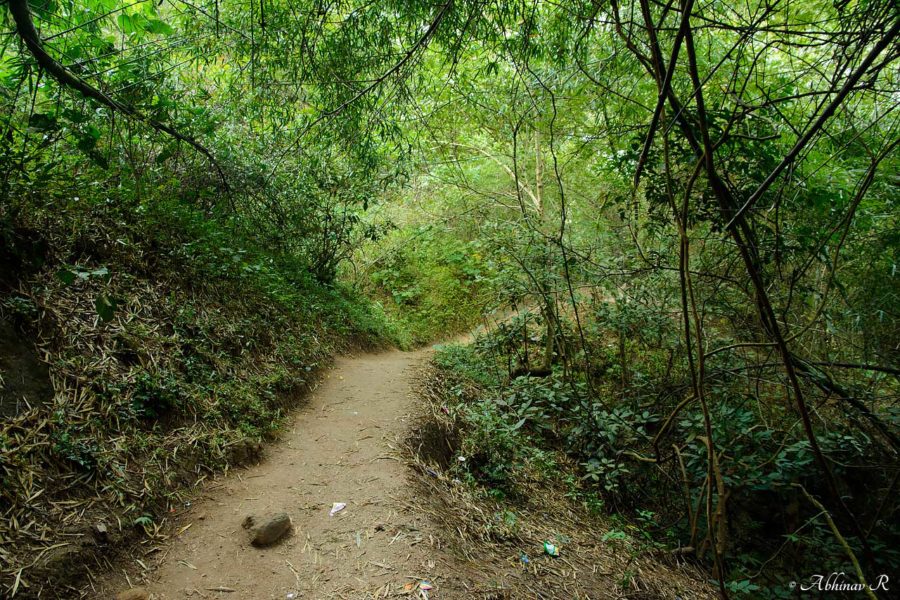 The path to the top of the hill. 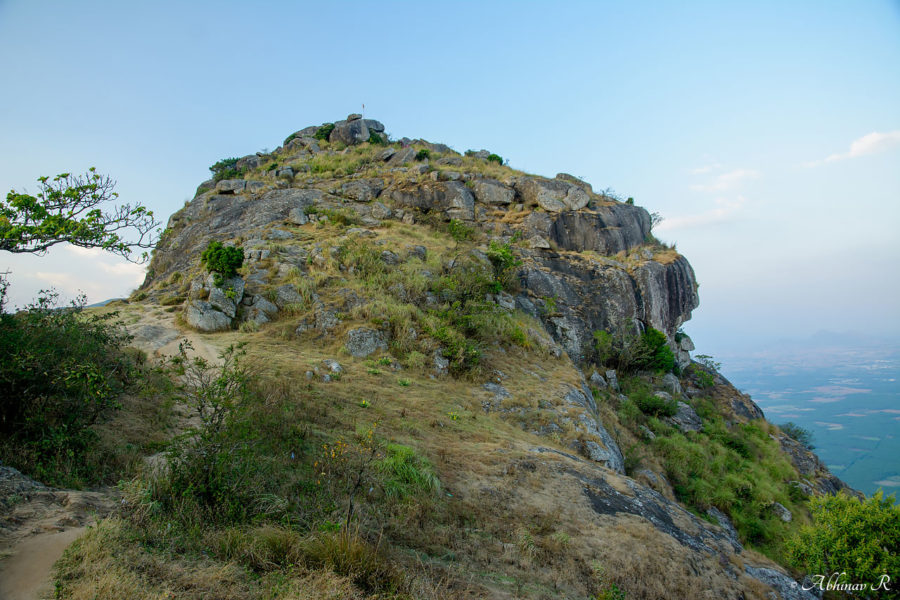 The big rock on the hill. 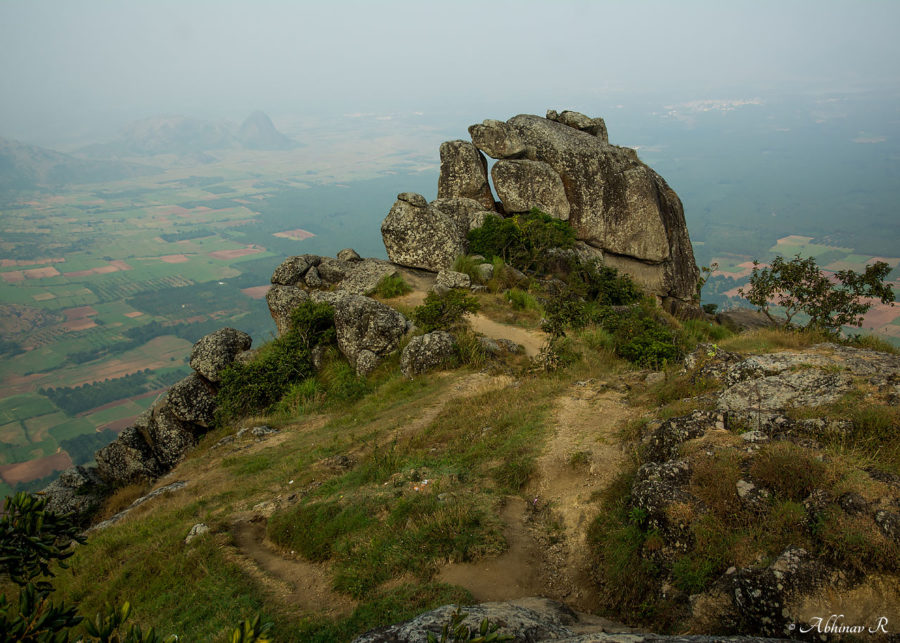 Another rock by the side. 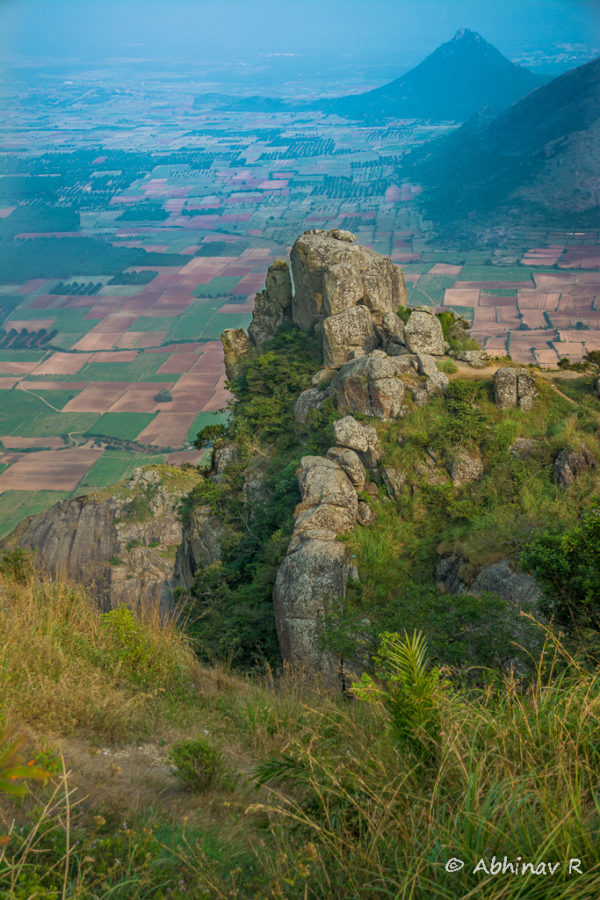 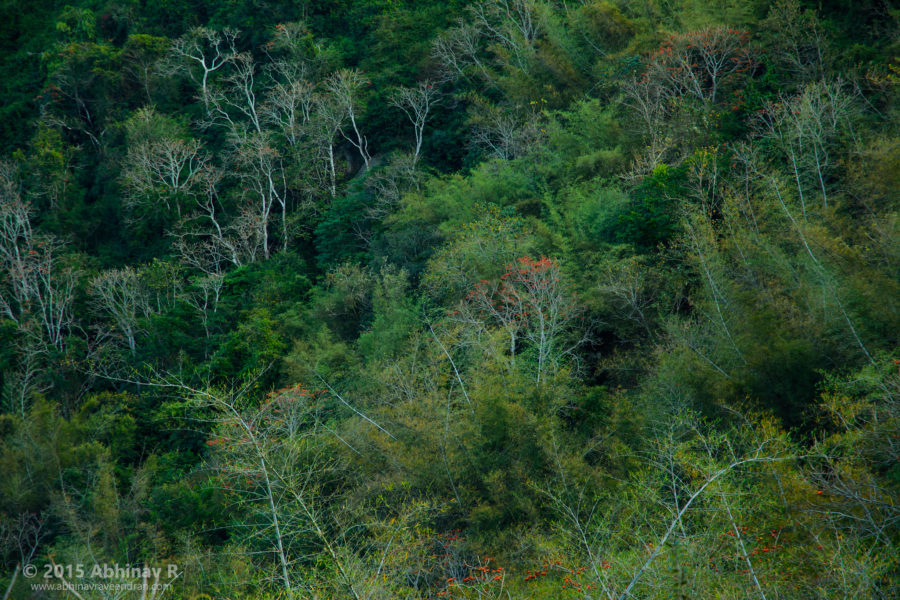 The shola and bamboo forests. 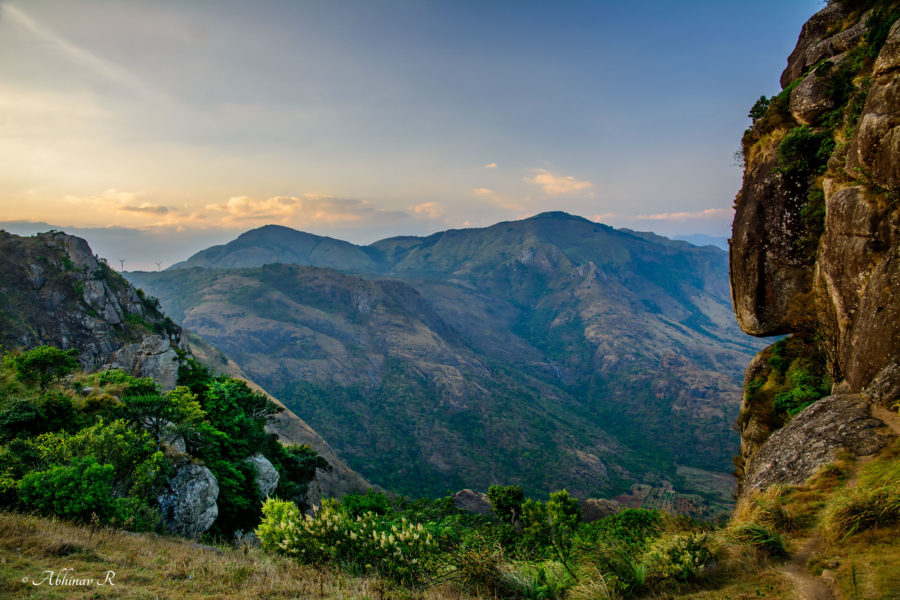 An evening scene before Sunset.

The statue is on top of another hill. There are an entry gate and a ticket counter with the parking space close to it. Vehicles cannot be taken inside to the statue area. After getting the tickets (only small fee), we can go near the statue by foot. The big statue was constructed in 2005. It is of three characters – Kuravan, Kurathi and a child. There is also a story saying that Kuravan and Kurathi are the people who showed the site for building Idukki arch dam, which is about 40 km from here. The two hills between which the dam is built are also named Kuravan mala & Kurathi mala (mala meaning hill).

There is a small mandapa (small pavilion) behind the statue where we can sit and relax. From the hill, we can see the towns of Kombai towards the north-east, Uthamapalayam towards the east and Cumbum towards the south-east. The views are amazing during the dusk when these towns start to lit up. 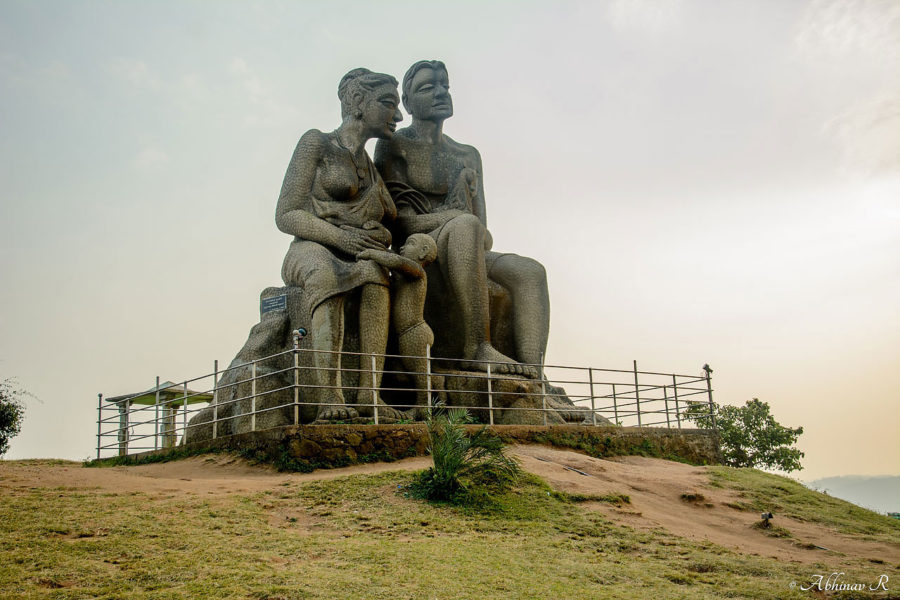 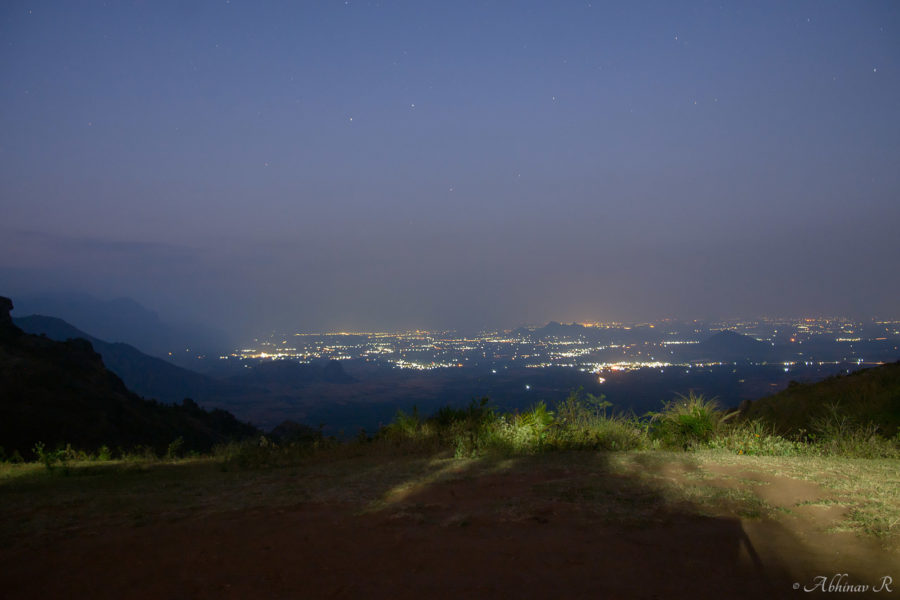 Cumbum town viewed from the statue hill at dusk. 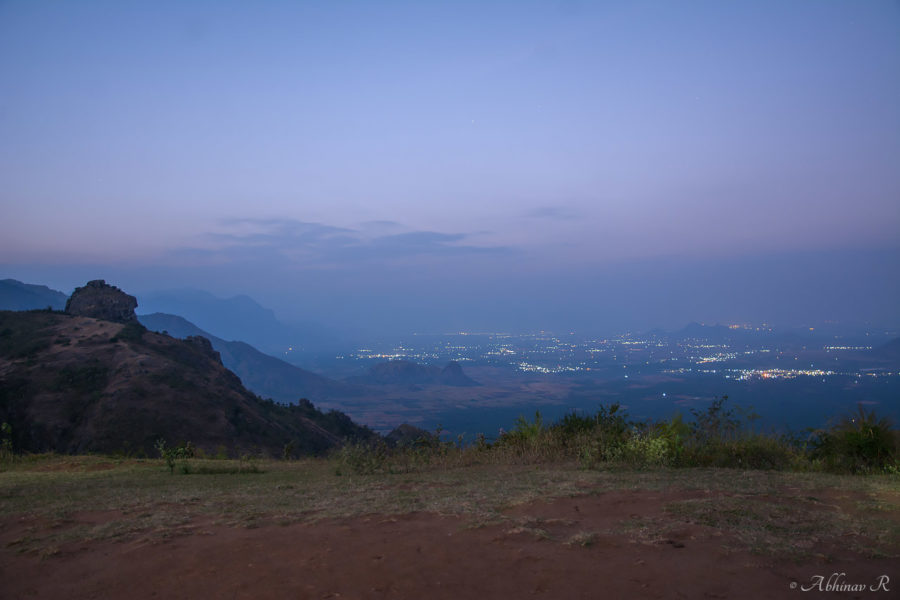 Another town viewed at dusk from the hill.

As the place receives constant wind, there is enough potential for generating power from wind energy. So a wind farm is established on the hills. It is visible from the top of the above-mentioned hills.

This may not be a complete list of things, but some of the important ones I have visited. If you know about other attractions or activities around the place, please be sure to mention it in the comments.

Ramakkalmedu is just 39 km from Thekkady, Kumily and 60 km from Munnar, two major destinations in Kerala. If you are coming from Munnar via Nedumkandam, take left from Thookupalam. The road to Ramakkalmedu is good, so the place is well accessible. It is better to come by your own vehicle as public transport facilities are less. There are a few resorts for tourists to stay. Our visits were one-day trips, as the place is close to us from Kanjirappally.

Nearby attractions within 75 km:

So be sure to visit this destination if you are coming to Idukki.

6 thoughts on “Ramakkalmedu – A Breezy Hill Station in Idukki”